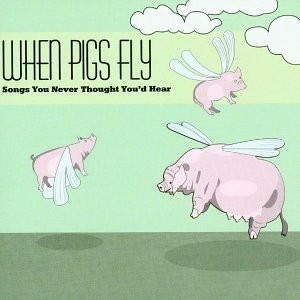 When Pigs Fly is a compilation album of outlandish pairings comprised of songs one would not expect a particular artist to perform. These songs were recorded exclusively for this project and these songs cannot be found anywhere else. Well, except for the Roy Clark track which was added as I wrapping up the project and wanted an even dozen songs. The concept for the album began in response to Eric Clapton's acoustic butchery of his classic song, "Layla." Tongue in cheek, I created an acoustic version of Quiet Riot's, "Metal Health." When the song came out much better than I ever anticipated, I was able to get Quiet Riot's lead singer, Kevin Dubrow, to perform lead vocals. His performance was spectacular and he really liked the novel approach. That track can be found on The Neanderthal Spongecake's album, The Side Effects of Napalm and friends have insisted that it is the greatest cover song ever recorded. The success of that project led me to do more. Rather than have people remake their own songs, though, I thought it would be more interesting for artists to cover other people's songs that were very different from their own style. Since I had to convince everyone to participate, every song has an interesting story behind the struggle for its creation. The results have been incredibly well received and worth the effort.