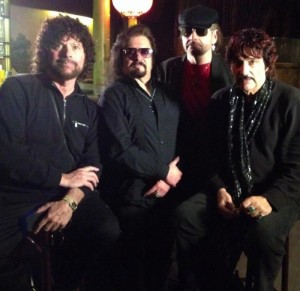 Vanilla Fudge’s Acclaimed Reunion Album, “Spirit of ‘67” Released As A Vinyl Edition By Cleopatra Records
Innovative Band’s Interpretations Of Classic Songs From 1967 Heralded As Its Best Since Band’s Own 60s Debut.
1967.
It was called a time to “tune in, turn on, and drop out.”  With its memorable Summer Of Love and the birth of a new world order youth-driven social consciousness, 1967 remains a pivotal year in the history of America, and the rest of the world, for that matter.  Now, with its latest studio album, reuniting 3/4ths of the original band, Vanilla Fudge pay tribute to the music that made that time so special.
Beginning Friday July 24th,  Spirit of ’67, will be available in a limited 12” “starburst” vinyl release from Cleopatra Records.
Spirit Of ’67 has given music fans a return to the classic VF sound:  slowed-down, heavily-psychedelic arrangements of songs that had been known as Top 40 pop hits in their original versions.  Give these songs to the Fudge, however, and you add sheer weight and depth that cuts through with the always-mesmerizing vocals of Mark Stein.
The influential ALL MUSIC.com website gave Spirit of ’67 its highest 5 star rating, and Newsday said of the record: “Their thrilling metallic twist on Smokey Robinson's ‘Tracks of My Tears’ may not be as groundbreaking as their take on ‘You Keep Me Hangin' On,’ but it is certainly in the ballpark, with Mark Stein's great, soulful vocals and Carmine Appice's inventive drumming taking the spotlight. We can only hope this ‘Spirit’ starts a series.”
Including all-new versions of iconic hits such as “Gimme Some Lovin’”, “For What It‘s Worth,’” “I Heard It Through The Grapevine,” and “I Can See For Miles,”  Spirit of ’67  features that legendary Vanilla Fudge sound recorded with today’s state-of-the-art recording technology.  The result is a trip in the way-back machine, that sounds remarkably fresh.
“When CDs first came on the scene in the early 1980's, they took the industry by storm because of the flawless, digital, clean & powerful production which was great,” says vocalist/ keyboardist Mark Stein. “However, when you put the needle down on a vinyl recording there was a warmer, analog vibe that is also distinctive. I'm excited that our new effort Spirit of 67 will be available now on vinyl as this will blend the old school tradition with the production sound of today."
Adds drummer Carmine Appice: “Spirit of 67 for me was a breakthrough album. This was the first time in many years the Fudge sat in a room together to tear apart and reconstruct songs that everyone knows. The arrangements performance and production are top of the line. I love the whole record.” Appice also sang lead on the first half of  “Tracks Of My Tears,” and background vocals on the rest of the album.
Spirit of ’67 was jointly produced by Stein and Appice, and also features founding member/ guitarist Vinny Martell, and bassist Pete Bremy, recruited to replace original bassist Tim Bogert, who retired from touring in 2008.  Vanilla Fudge broke out of the international music scene in 1967 with its blue-eyed soulful version of The Supremes’ “You Keep Me Hangin’ On.”  The platinum success of its first album led to three years of constant touring and numerous TV appearances such as The Ed Sullivan Show.  The band parted ways in 1970, but has reunited a few times since.  Spirit of ’67 marks the first studio album for the band in over 30 years.
Vinny Martell, a US Navy veteran and whose contributions shaped many of the songs such as “I Heard It Through The Grapevine,” notes the similarities between the time the band’s first album was released and today: “"Spirit of '67," on vinyl is being released at a time when the world is in turmoil and divided by war…much as it was in 1967 with our first album… Then, our music reached across racial divides and behind the Iron Curtain… Now, we want to reunite with fans and connect with a new generation…”
“ Cleopatra Records jumped at the opportunity to work with such an
iconic band as Vanilla Fudge," says label VP Tim Yasui. “ Spirit of '67 is an album that we're proud of getting behind – the band delivers a 1-2 punch with their unique takes on these classic songs that only the Fudge can deliver"
See the Vanilla Fudge live in concert beginning in August:
August  7  2015-                 The Arcadia Theater– St. Charles, IL
August 8, 2015–                  POP’S Sauget, Illinois
August 15, 2015     Pompano Beach Amphitheatre Pompano Beach, FL.
October 8, 2015                  Bull Run Shirley, MA.
October 9, 2015                  Penn’s Peak Jim Thorpe, PA.
October 10, 2015                Tangier – Cabaret Room Akron, Ohio
October 12, 2015                Ram’s Head  Annapolis, MD.
October  28& 29th               Shimokitazawa Gardens Tokyo, Japan
November 6, 2015                         Scottish Rite Auditorium Collingswood, NJ
November 8, 2015                         BB Kings NYC
Order  Spirit of ’67 at: http://cleorecs.com/store/?s=vanilla+&post_type=product
View the video for “I Can See For Miles:” https://www.youtube.com/watch?v=tCUKPvOpxSg
For All Things Vanilla Fudge: www.vanillafudge.com