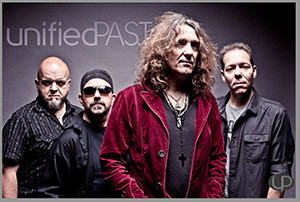 Acclaimed Progressive Rock Artists, UNIFIED PAST, set to release 7th album, Shifting The Equilibrium, on Melodic Revolution Records.
Upstate New York’s acclaimed progressive rock band Unified Past, return with its most compelling album to date, Shifting The Equilibrium,
set for release September 15th on Melodic Revolution Records. Combining    the best elements of the British progressive-rock style, with a distinct
heavy-metal edge Shifting The Equilibrium, delivers the goods in grand fashion: strong musicianship; killer vocals; and  memorable melodies, all presented within a sonic landscape that cuts through to the heart of the listener.
“We believe Prog music is becoming more popular in the U.S with each passing year and we think the U.S fan base is ready for our version of power prog,” says guitarist and co-founder Stephen Speelman. Adds  drummer and co-founder Victor Tassone: “I like to place Unified Past into it's own pocket by delivering a unique base. I try to achieve that with a balance of expressiveness and drama in every beat.”
From the anthemic “Today Is The Day,” a 12 minute prog opus to “Smile In The Face Of Adversity,” which the band calls “ a symphonic metal / rock opera type song”, and finally to “Peace Remains In the World,” certainly the heaviest metal-flavored song the band has yet done, Shifting The Equilibrium, will not only satisfy fans of their first six albums, but attract a new legion of Unified Past believers.
In addition to the new album, Unified Past are introducing a new member, frontman and vocalist Phil Naro. The band and Naro met through an introduction provided by the band’s label Melodic Revolution, which also had Naro as an artist.  Naro brings with himself, a strong rock’n’roll pedigree, having performed and/or recorded with the likes of Billy Sheehan, Styx vocalist Lawrence Gowan, Kim Mitchell, Brian May, Julian Lennon, Peter Criss, Lou Gramm, Don Mancuso, Carmine Appice and Rudy Sarzo, among others. He has recorded and performed most recently with Rascals guitarist and Rock and Roll Hall of Fame inductee Gene Cornish, whose solo band The Dangerous Lovers is also fronted by Naro.
“Phil has brought a whole new dimension to the band and its music,” says Speelman. “He was just what the doctor ordered in terms of his musicality and vocal prowess. We have always been proud of our line up, but this time around, we feel the band has everything it needs to breakthrough.”  Adds Naro about his emersion into the band as not only a vocalist but a co-writer of the songs: “Stephen & Victor came up with something impressive and it inspired me to come up with something equally impressive. I spend a lot of time in my own head, which is very important, me. I'm often scribbling down fragments that later act like trigger-points for lyrics & melodies.”
In addition to Naro, the band has been working with Cleveland-based keyboardist Jason Hanley, who has his doctorate degree and oversees the educational programs at the Rock and Roll Hall of Fame Museum.
The origins of Unified Past date back to 1991 when Speelman and Tassone formed  Long Island’s Labyrinth. Eventually Labyrinth signed with Atomik Records before splitting up in 2001. From there Speelman earned his Master’s Degree in Classical Guitar, and Tassone appeared on several independent prog releases, including Corvus Stone, Andy John Bradford’s Ocean’s 5 and The John Orr Franklin’s Breaking Ground Project.
The two musicians reunited in 2009 to form Unified Past mainly as a duo-studio only project. They released Tense in 2009 and soon after signed with Melodic Revolution Records. In 2011, they released Observations, which began to see them develop their fan base once again and achieved recognition in the independent progressive rock circles.  In 2012, Speelman was recruited to work with Anthrax vocalist Joey Belladonna and it was while doing shows with Belladonna that Speelman met bassist Dave Mickelson.  2013’s Spots  album broaden the band’s popularity still, leading the way for the expansion of the line-up and the prospect of  the band’s first ever live shows.
“We were created as a studio-only project,” says Speelman, “it was never our intention to be a performing band. At the time we had too many other commitments. Now, the entire dynamic has changed. We have a real band entity in place, and it only makes sense for us to hit the road and take this music directly to our fans.”

View the Unified Past video:
https://youtu.be/v5ga95kxOGU

Listen to the music:
https://soundcloud.com/unified-past/shifting-the-equilibrium-teaser

For All Things UNIFIED PAST, please visit:  www.unifiedpast.com