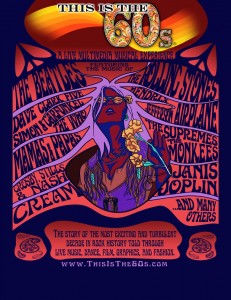 The show is a walk through the most historic and memorable decade of the last century, from JFK to Beatlemania to Viet Nam and Woodstock. Here is a link to the 5 minute Electronic Press Kit, to show you what the show is all about: a combination of unforgettable video images, narration, costumes, lighting, and live music performances to re-create the entire Sixties in all its colorful glory. The music. This is the 60's, a live multimedia musical experience. Executive producer Jim Duffy is an award winning documentarian who conceived the show while creating a series idea for the History Channel. He wanted to create the ultimate documentary about the 60s, its music and how the it became the most revolutionary decade of the last century. What he created, instead, was the world's first "LIVING DOCUMENTARY"; a stage production that combines narration, live musicians, dancers, and some of the most amazing archival 60s footage ever seen. The show incorporates live music, spoken word, dance, and 6 HD projectors on three 30 foot high screens.