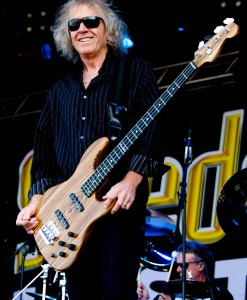 Fans of melodic, progressive hard rock have been waiting a long time for this: I Will Survive, the new album by Seventh Key, and the first new CD of studio recordings since 2004's The Raging Fire. Spearheaded by long time Kansas bassist / vocalist Billy Greer and guitarist / keyboardist Mike Slamer (ex-City Boy, Streets, Steelhouse Lande), they are joined by drummer Chet Wynd and a slew of special guests. Formed in 2001 as a side- project for Greer and Slamer (the two had played together in the early 1980s in Streets with Kansas's vocalist Steve Walsh), Seventh Key released an acclaimed self-titled debut but then went dormant again due to the member's previous commitments. The group resurfaced in 2004, with the compelling album, The Raging Fire, and a live CD/DVD the following year. Part of Seventh Key's musical magic comes in its ability to effectively blend both melodic hard rock and intricate progressive music. They deliver powerful songs and production values that always include big sonic landscapes.