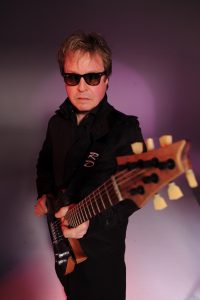 Rick Derringer burst on to the international music scene with his young band, The McCoys in 1965 with their first hit, Hang On Sloopy! Sloopy was the number one song in every country that sold records in 1965! The McCoys first U.S. tour had them opening for the Rolling Stones. The McCoys ultimately had seven songs that charted in the top 100.

In 1973, Rick and his band mates ultimately joined forces with blues rock guitarist Johnny Winter and the band was renamed Johnny Winter And… Rick was writer/producer of the Still Alive And Well album. The album was a critical and commercial success. Later that year Rick recorded his All American Boy album which included the ultimate rock song – Rock and Roll Hoochie Koo.

Following success with Johnny Winter, Rick produced Edgar Winter’s platinum selling album – They Only Come Out At Night. The latter featured the No. 1 Grammy nominated monster hit, “Frankenstein” and the perennial favorite “Free Ride.” Rick and Edgar went on to become band mates in the White Trash (band).

In 1976, Rick created the Derringer Band. He released four albums and in ’83 returned to his solo career with the LP, Good Dirty Fun. Derringer continued to tour globally and opened for Led Zeppelin on the last two dates Zeppelin would ever play with the original members of the band.

Rick was sought out to produce, write and perform on the World Wrestling Federation LP which included Hulk Hogan’s theme song, “I Am A Real American”. The song has been used often in campaigns and events by three U.S. Presidents.

In 2010, Rick joined Ringo Starr’s All Star band for two years for a world tour. Derringer has released over 25 albums including several Blues and Jazz albums most recently. His work can be heard daily on TV and Radio internationally.