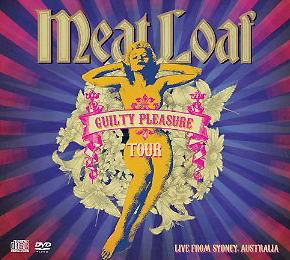 Meat Loaf exploded on international music scene in 1977, with the release of his icon debut thematic album, Bat Out Of Hell, written by friend and colleague, Jim Steinman. Among the albums to define the arena rock genre, it has sold to date over 43 million copies, making it the fifth highest selling album of all time. He went on to have several more gold and platinum successes with Dead Ringer (1981), Bad Attitude (1984) and the Bat Out Of Hell sequels Bat Out Of Hell II: Back Into Hell (1993) and Bat Out Of Hell III: The Monster Is Loose (2006). In 2010, he released Hang Cool Teddy Bear, followed by this year's Hell In A Hand Basket. He has also starred in several dozen Hollywood films, including the legendary Rocky Horror Picture Show, and Fight Club, where he acted opposite Brad Pitt.

Meat Loaf has released several popular DVD titles prior to The Guilty Pleasure Tour. They include: Bat Out Of Hell – The Original Tour; Bat 3 Live; and Live With The Melbourne Symphony Orchestra. Says Concert One's Steve Timmins: "On The Guilty Pleasure Tour DVD Meat Loaf gives his fans exactly what they are wanting to see. He knows what he wants and has had a lot of experience in front of a camera so knows exactly what works."