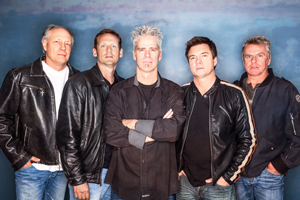 Little River Band was formed in 1975 in Melbourne, Australia with several members that had previously played in successful Aussie bands. They soon became the darlings of American radio programmers, and from 1976 through the early 90s, the hits just kept coming. Among them:  "It's a Long Way There," "Help Is on Its Way," "Happy Anniversary," "Reminiscing," "Lady," "Lonesome Loser," "Cool Change," "The Night Owls," "Take It Easy on Me," and others. In the end, the group scored 13 Top 30 Hits and has sold over 30 million records. Fronted by 32 year-LRB veteran Wayne Nelson, (lead vocals, bass), LITTLE RIVER BAND now features an energized line up of: Richard Herring and Greg Hind on guitars and vocals; keyboardist/ vocalist Chris Marion; and drummer Ryan Ricks. The group's newest CD, Cuts Like A Diamond Â features a myriad of songs that can only be categorized as "classic Little River Band."